Abstract : This report examines the case of a female patient in her 20s who received three full body shiatsu treatments between May 24 and June 7 2015, with the objective of reducing psychological stress. The psychological effect was evaluated using the Profile of Mood States (POMS) index. Following treatment, improvements in the t-scores of all six POMS factors were observed. This suggests that full body shiatsu therapy has a stress-relief effect, which may be verified through further studies.

So many people are feeling the effects of psychological stress in modern society that stress can be considered endemic 1. In Japan, many people look to alternative therapies, including anma, massage, and shiatsu, for treatment of stress.

Multiple studies have been conducted into the effects of manual therapy on stress relief 2~5, confirming its effectiveness. Research has also been conducted into the use of shiatsu for treating stress 6, but insufficient data exists on the effects of general shiatsu carried out by a therapist on a patient. In this paper, we report on a case in which full body shiatsu used to alleviate stress with psychological stress measured using a mood profile, which will serve as a springboard for future investigation.

Female office worker in her 20s

In order to evaluate psychological effects, a Japanese-language POMS™ test (Kaneko Shobo) was administered immediately before and after treatment. POMS is a mood profile test developed by McNair et al in the U.S., which employs answers to 65 questions to enable simultaneous measurement of six factors: tension-anxiety, depression, anger-hostility, vigor, fatigue, and confusion 7. The POMS results for this report were converted from raw data to t-scores and totaled. POMS has been implemented on large groups of healthy adult males and females and standardized, with t-scores calculated for mean value and standard deviation by age and sex. The t-score is calculated as 50 + 10 x (raw score – average score) / standard deviation. If the raw score is equal to the average score, the t-score will be 50. The lower the t-score, the lower the tension-anxiety, depression, anger-hostility, vigor, fatigue, or confusion. Thus, for vigor, a higher t-score indicates a more favorable condition 7.

The goal and measurement procedure for POMS was fully explained to the patient and her consent obtained.

The patient was transferred to a new department at work in April 2015 and, still unaccustomed to the new workplace and job responsibilities, was experiencing high daily stress levels. Work mainly involved VDT (video display terminal) operation, with over 7 hours per day spent engaging in computer input.

Table 1 shows the POMS t-scores measured before and after all three treatments. Aside from the anxiety factor on May 24 and the vigor factor on May 30, the values for all factors showed improvement posttreatment, with a general trend toward improvement as the treatments progressed (Fig. 1). 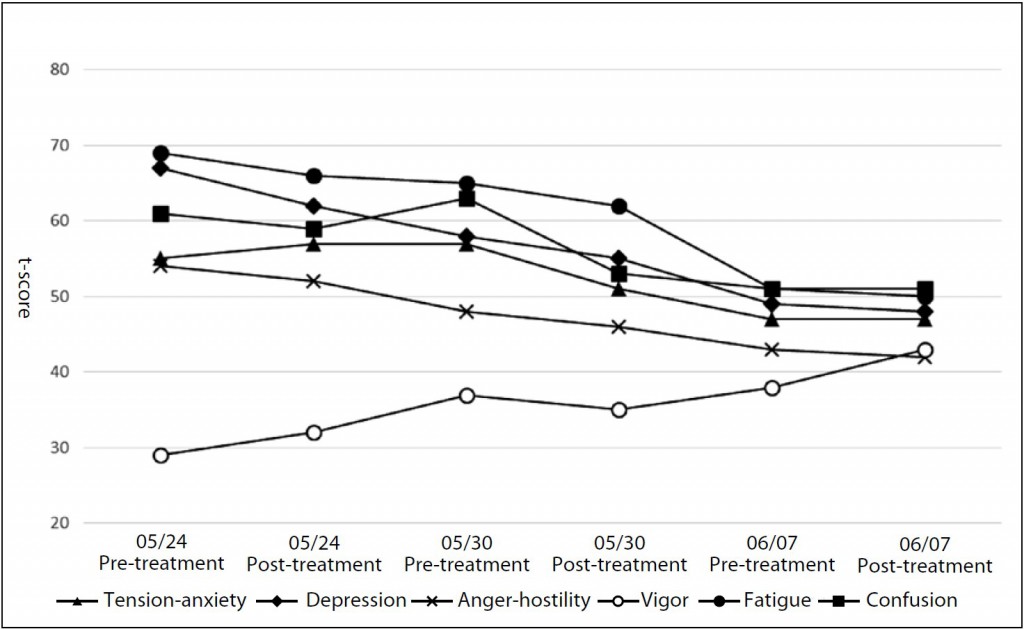 Improvement was observed in all six POMS factors over the course of three full body shiatsu treatments.

Measurement of the Psychological Influence of Full Body Shiatsu Therapy: a Case Report 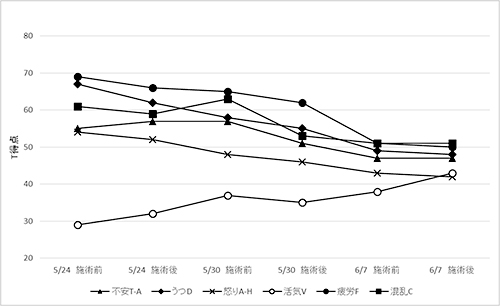