Abstract : In clinical practice, one encounters many patients presenting subjective symptoms of shoulder stiffness or back pain. Here we examine a case in which symptoms were alleviated through posture and joint correction, in addition to using shiatsu therapy to reduce muscle tension. By combining the pressure applications of shiatsu therapy with mobilization, it was possible to achieve an effect on both muscles and joints.

In clinical practice, one often encounters patients for whom, even though muscle tension is alleviated through shiatsu therapy consisting of pressure application to muscles and soft tissues, similar symptoms return after several days or weeks.

It was our opinion that these symptoms could be more effectively treated with a combination of shiatsu therapy and ongoing posture correction and joint adjustment.

Here, we report on a case in which significant therapeutic effect was achieved through joint adjustment and posture correction via the use of pressure applications combined with mobilization. 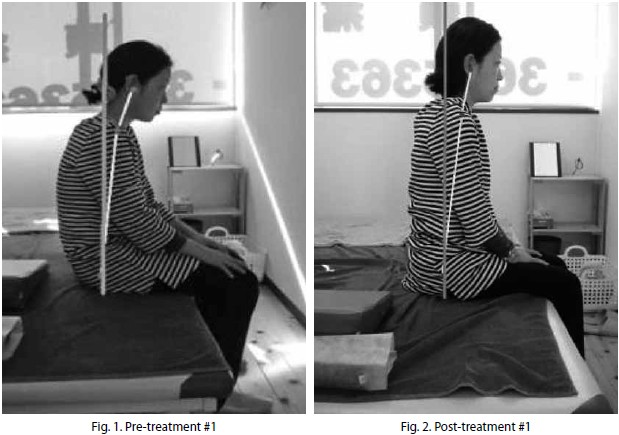 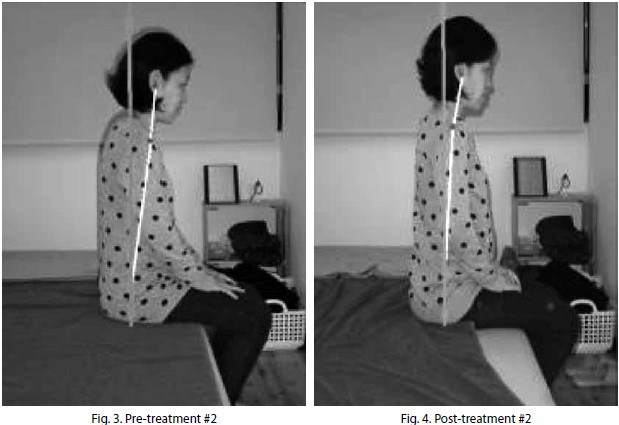 According to the Comprehensive Survey of Living Conditions by the Japanese Ministry of Health, Labour and Welfare 2, the two most common symptoms experienced by both men and women in Japan are, in order, stiff shoulders and lumbar pain. Little has changed in this situation, and a comparatively large number of patients visiting our clinic list stiff shoulders or lumbar pain as their primary complaint.

It is my experience in a clinical setting that, in order to alleviate shoulder stiffness or lumbar pain, effects are longer lasting if reduction of excess muscle tension is used in combination with joint adjustment.

The reason is that, as humans are bipedal, they must continually maintain posture in opposition to gravity. The extensors, trunk muscles, and other antigravity muscles must maintain contraction in order to resist gravity and maintain proper posture, which when disrupted is corrected by postural reflexes 3. It follows that a greater load is placed on these muscles when proper posture and skeletal alignment are regularly disrupted during routine daily activities. For this reason, correction of chronically disrupted postural and skeletal alignment should help alleviate symptoms of shoulder stiffness and lumbar pain.

In this case, initial examination revealed marked postural disruption from the line of gravity (Fig. 1), indicating probable hypertonus in the pectoralis major and other shoulder internal rotator muscles along with reduced tonus of the antigravity muscles. Also, hypertension in the gluteus maximus and hamstring muscles were likely responsible for the posterior pelvic tilt.

In the initial treatment, hypertonus in the gluteus maximus and hamstrings was improved, along with overextension of the quadratus lumborum and erector spinae muscles, as was evidenced by the reductions in posterior pelvic tilt and lumbar kyphosis. Also, concerning the shoulder joints, changes to the position of the scapula were likely due to reduced hypertonus in the internal rotators, including the pectoralis major, latissimus dorsi, and subscapularis (Fig. 2).

Prior to treatment #2, a slight internal rotation of the shoulder joints was observed, though no major postural disruption from the line of gravity compared to post-treatment #1 was apparent (Figs. 2, 3). In treatment #2, further improvements to pliability in hypertoned muscles improved balance with over-extended muscles, causing positional changes to the shoulder joint and humerus that likely resulted in reduced tension in the trapezius, sternocleidomastoid, and other neck muscles that led to improvements in head position.

It is difficult to determine whether disrupted posture due to routine daily activities led to muscular hypertonus and hypotonus or whether the problem was due to irregularities in joint alignment, but since multiple reports have shown that shiatsu stimulation effectively increases muscle pliability 4-6, in this case it is likely that pressure application relaxed hypertoned muscles that were the cause of postural disruption while mobilization improved joint positioning, resulting in alleviation of symptoms.

When the pressure applications of shiatsu therapy are combined with mobilization, there is a tendency for symptoms of stiff shoulders and lumbar pain to be alleviated due to elimination of muscle hypertension and improved joint positioning. However, because this report only contains one example, it will be necessary to study a larger number of cases.

Abstract : Many people with subjective symptoms such as stiff shoulder or low back pain are encountered in clinical practice. Here we report a case where shiatsu therapy helped the patient achieve symptom relief and better posture. Shiatsu therapy not only released the muscle tension but also adjusted the joints. Shiatsu therapy involves a combination of pressure application and exercise therapy, and it is possible that this combination had effects on both muscles and joints and helped achieve the favorable outcomes in the present case. 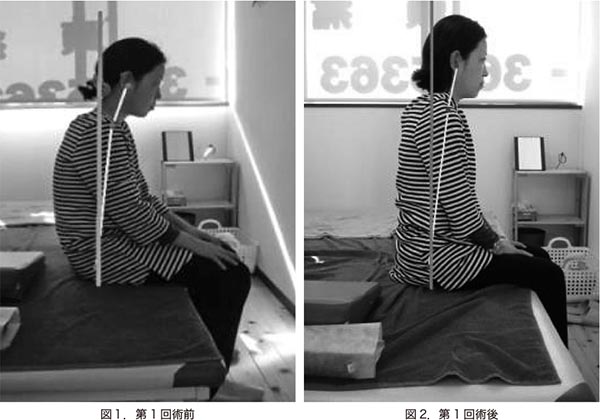 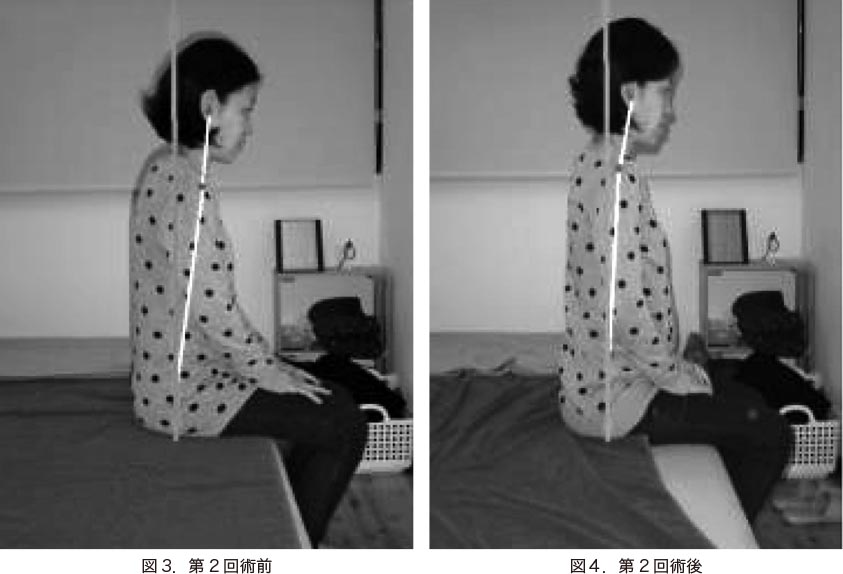