Abstract : There are few studies on the effects of plantar region shiatsu treatment on the locomotor system. In this study, we examined the effects of shiatsu stimulation of the plantar region on standing balance, based on measurements obtained using a stabilograph. Four healthy subjects received shiatsu treatment to the plantar region for 1 min 42 sec per session. Results showed no significant differences between the stimulation group and the non-stimulation group with respect to total trajectory length, outer circumference area, rectangle area, or effective value area. Further research is required using different test subjects and research methodology.

In shiatsu therapy, the plantar region is approached based on a variety of interpretations depending on the symptoms involved, with numerous accounts of its perceived efficacy based on experience.

However, few studies have been conducted on the effects on the locomotor system of Japanese manual therapies to this region.

In this study, as an initial step in clarifying the effects of shiatsu therapy on the muscles and structure of the plantar region and the consequent effect on locomotor function, we progressed to the pre-experimental stage in the measurement and analysis of changes to standing balance using a stabilograph. This is an interim report on the results obtained and summary of our ongoing research.

Research was conducted on four healthy males (mean age: 30 ± 10.68 years old) who were students at the Japan Shiatsu College. Test procedures were fully explained to each test subject and their consent obtained.

Testing was conducted in the lounge space at Japan Shiatsu College between January 29 and February 5, 2015.

In accordance with the basic treatment points employed in Namikoshi shiatsu, 4 points were stimulated between Point 1, located in the plantar region between the bases of the second and third digits, and the edge of the heel, using 2-thumb pressure with the test subject in the prone position (Fig. 1). 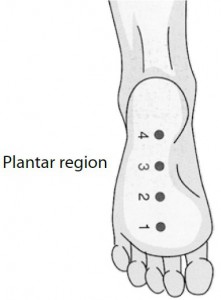 （2）Duration and method of stimulation 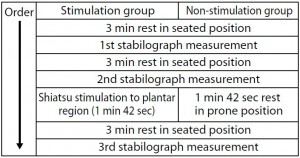 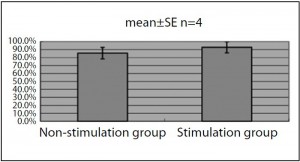 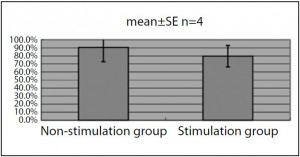 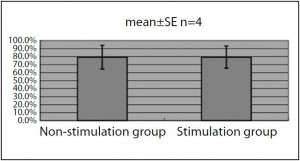 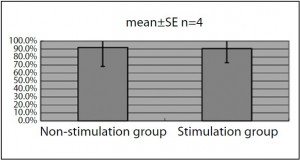 In this study, which was still at the preexperimental stage, we were not able to obtain data or statistical results to substantiate the effect on balance of shiatsu to the plantar region. However, each sample observed suggested a trend in the effect of shiatsu stimulation, so there is a chance that a different result will be obtained when testing is conducted with a larger sample size.

On the other hand, all measurement values obtained from this sample were from healthy test subjects considered to be within the standard range 7. It was assumed that, for test subjects within such a range, measurement values would be easily variable based on physical condition, a factor which cannot be averaged out through uniform test procedure. For this reason, it is difficult to fully investigate the effect of shiatsu stimulation on standing balance using the measurement data obtained from a stabilograph alone.

In future study, it will be necessary to consider an experimental method that includes examination of test subjects and the use of other measurement criteria in addition to the stabilograph, with integrated analysis of the results obtained.

Shiatsu stimulation of the plantar region in four healthy test subjects did not produce a statistically significant change in measurement values using a stabilograph.

Testing of the effect of plantar region shiatsu on standing balance was insufficient due to the limitations of the test procedure employed at this stage, necessitating a reexamination of the methods employed in testing.

Abstract : According to some studies, many athletes have the impression that pregame shiatsu may cause undesirable muscle relaxation. We therefore studied the effects of shiatsu on muscle function by analyzing dynamic knee joint alignment. For this study, we defined the difference between the two extreme values of the dynamic knee joint alignment test as motion stability.Compared to the non-stimulus group, the stimulus group showed a significant difference in motion stability. This indicates that shiatsu produced effects not only on muscle function but also on the nervous system controlling muscle power output.This study showed just one aspect of the various potential effects that shiatsu possesses, including performance improvement and athletic rehabilitation, and will help to change athletes’ perspectives of shiatsu. 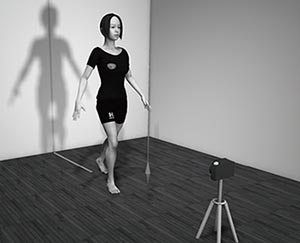 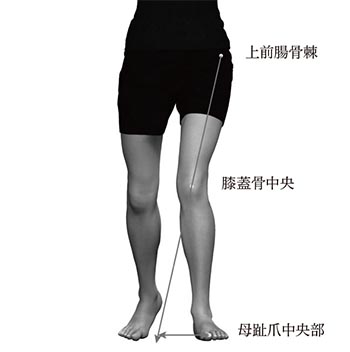 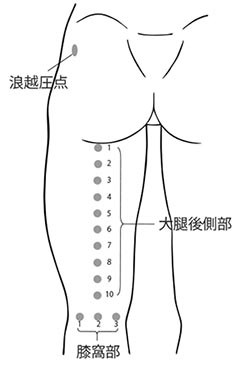 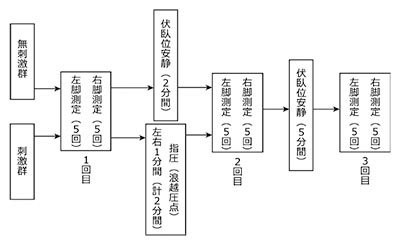 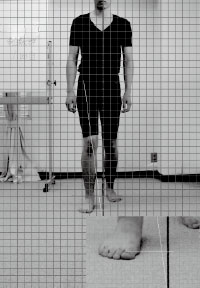 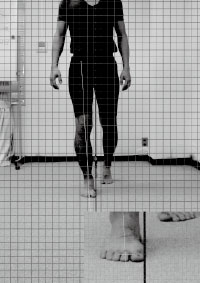 Survey by questionnaire about volunteer Shiatsu at Tokyo Yumemai Marathon
(The second report) : a survey report

Abstract : Following the survey report of the 12th Tokyo Yumemai Marathon, we conducted a survey in the form of a questionnaire at the Kagurazaka Station of the 13th Tokyo Yumemai Marathon using VAS (Visual Analogue Scale). About 97% of the respondents answered that the degree of fatigue or pain were reduced after the shiatsu treatment. Although there were some different conditions such as the weather and the number of questionnaires collected, the percentage was almost same as the last report. The number of cases with fatigue and / or pain in left leg was, however, lower than the last. It is necessary to discuss efficacy and effectiveness of shiatsu in sports fields by reviewing a format of the questionnaire and its implementation methods. 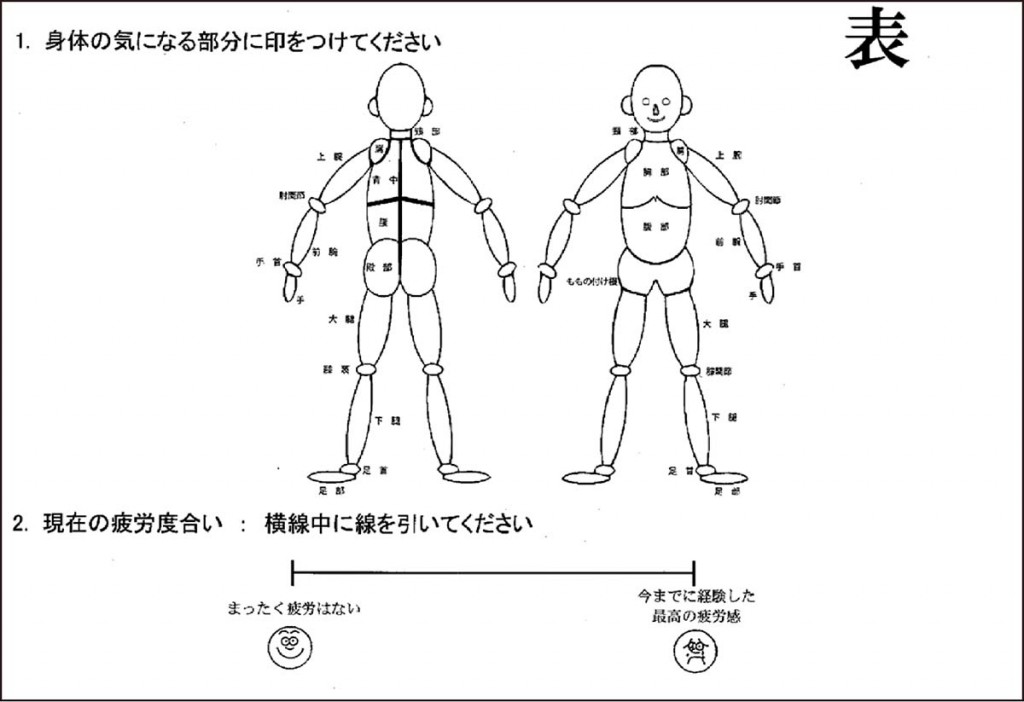 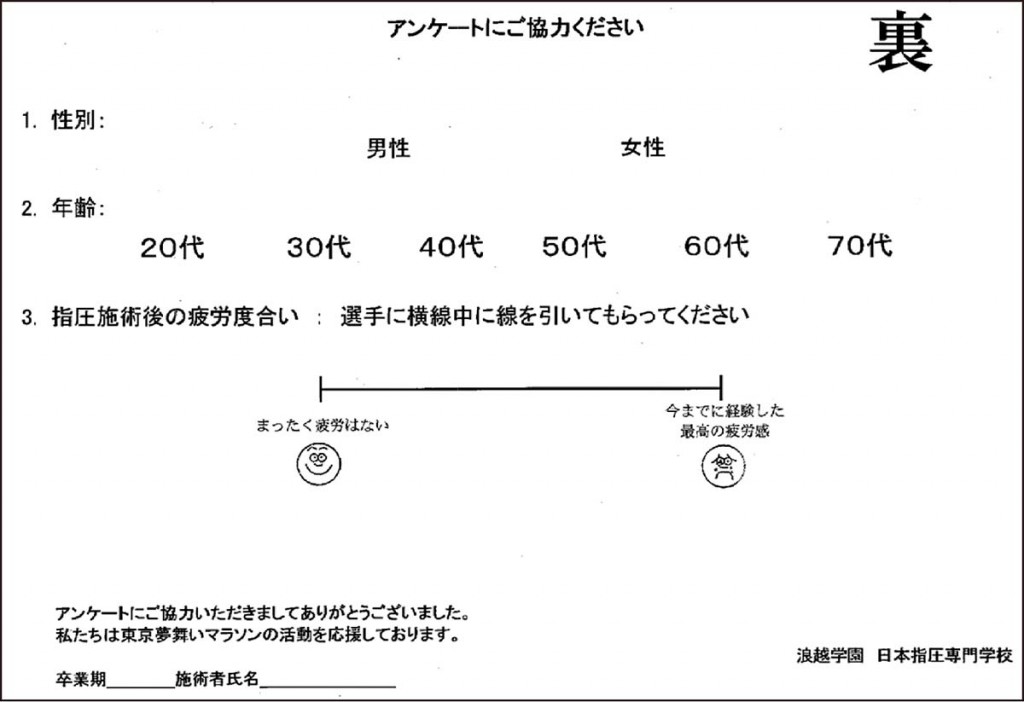 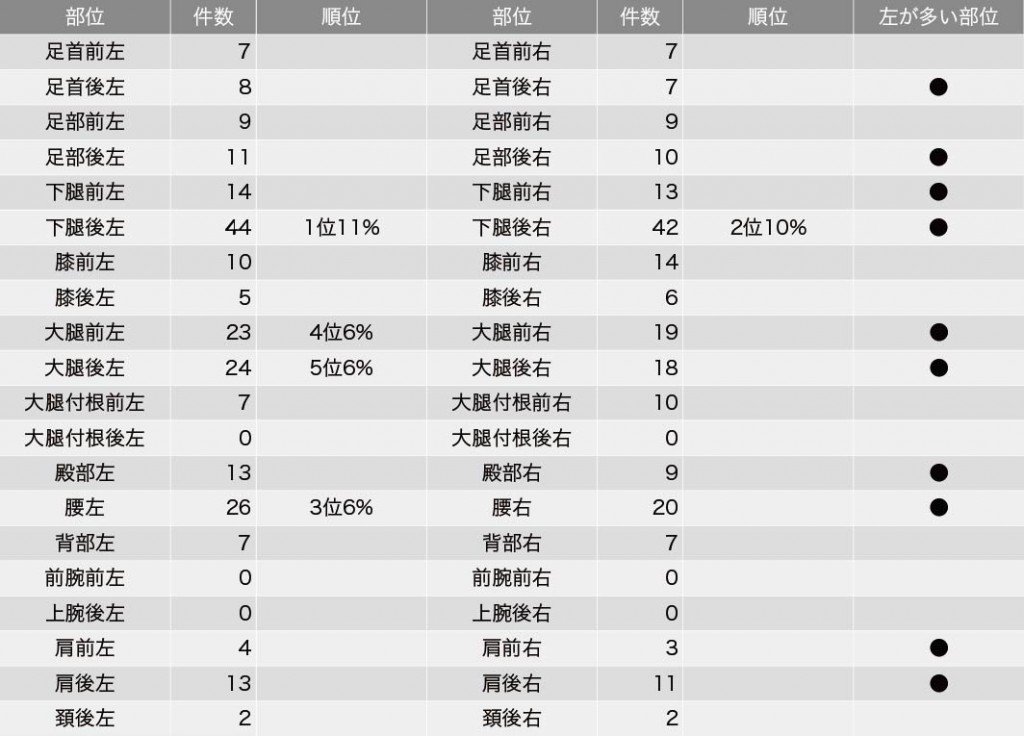 Recognition of Shiatsu in the field of beach football: a survey report 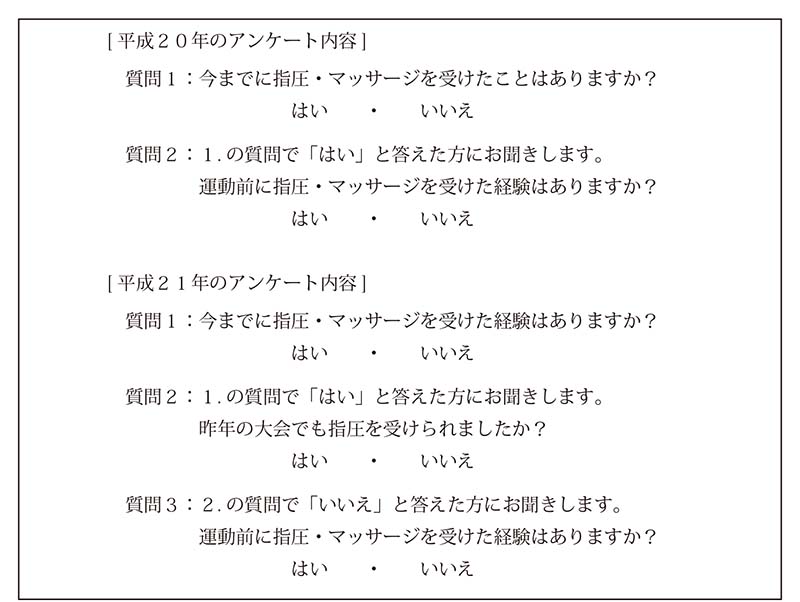 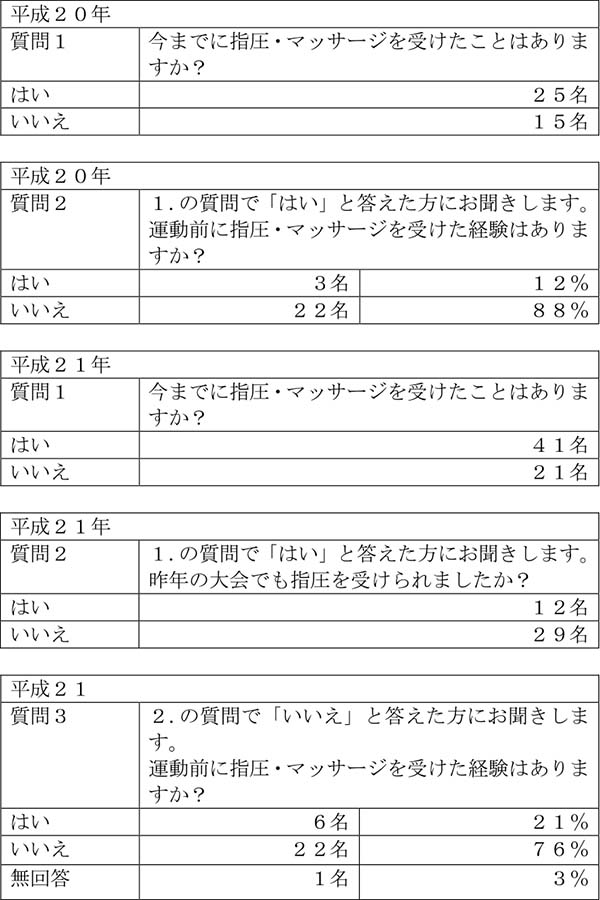 Survey by questionnaire about volunteer Shiatsu at Tokyo Yumemai Marathon
: a survey report

Abstract : We conducted a survey in the form of a questionnaire inquiring degree of pain before and after Shiatsu treatment using VAS (Visual Analogue Scale), which was 100 mm (= 100 points) in length. The questionnaire was A4 size, double-sided printing, and answered at the Kagurazaka Station of 12th Tokyo Yumemai Marathon (at the point of 33.892 km). The respondents were also asked to mark up fatigued and/or painful areas on illustrations of the questionnaire. As a result, about the degree of fatigue or pain described in VAS, 133 answered “decreased”, three answered “increased”, and two answered “remain the same” out of the 138 respondents. The average VAS score of the cases “decreased” was 38 points and “increased” was 28 points. Regarding the fatigued and/or painful areas, the top answer was the posterior region of left lower leg, and the second was the posterior region of right lower leg. 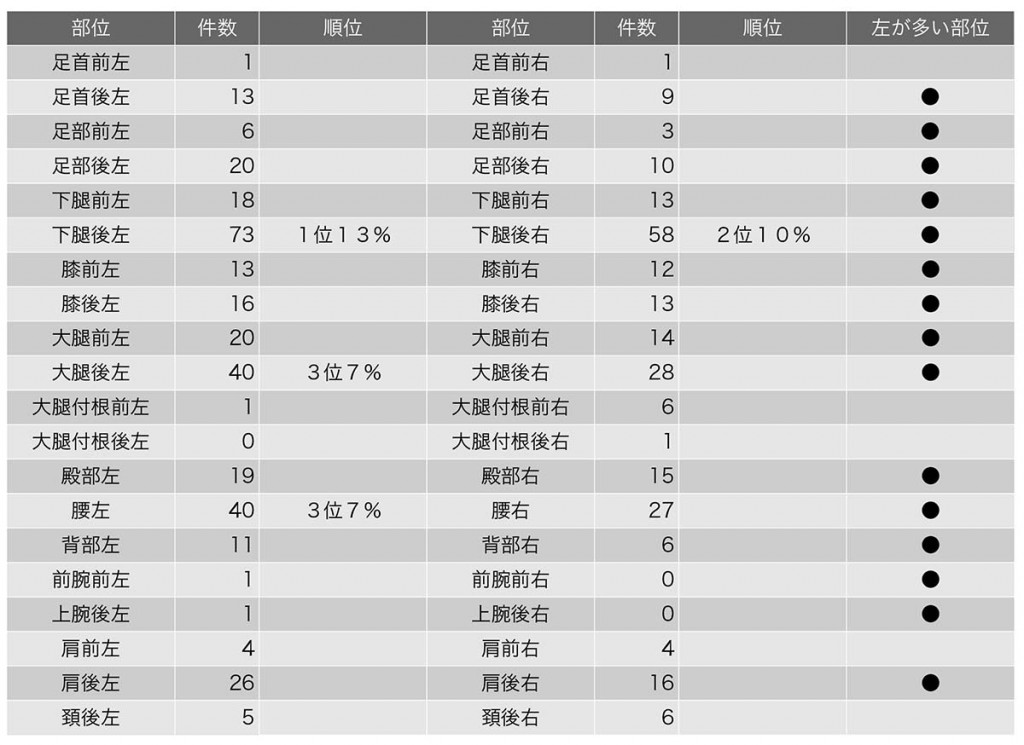