Abstract : The Timed Up and Go (TUG) test was employed to determine the effect of inguinal region shiatsu on walking ability. The post-treatment time was shorter than the pre-treatment time, suggesting that shiatsu stimulation may improve walking ability at least temporarily.

Yoshinari et al have reported on the possibility that shiatsu stimulation to the inguinal region increases range of motion for hip extension and lumbar vertebrae retroflexion in standing automatic trunk retroflexion 1, postulating that shiatsu stimulation to the inguinal region reduced tension in the iliopsoas muscles, increasing range of motion in the lumbar vertebrae and hip joints. However, there was no reference to functional changes. In this comparatively simple study, we observe changes to walking ability after inguinal region shiatsu using the highly reliable TUG test as an evaluative tool. The TUG test, devised by Podsiadlo et al in 1991 2, is a widely used evaluation index for walking ability in the elderly.

The subject was placed in a relaxed supine position with all four limbs extended. The therapist stimulated three points over the inguinal ligament, extending medioinferiorly from the anterior superior iliac spine to the lateral border of the pubic bone 3. Stimulation consisted of (1) palmar pressure (pressure using the thenar eminence) and (2) shiatsu using the therapist’s thumbs of both hands, held for approximately 5 seconds per point, applied for 5 minutes each on the left and right sides. Strength of pressure was such that, when the therapist’s palm and thumbs sank into the skin and subcutaneous tissue, he was able to feel the inguinal ligament and femoral pulse, at a pressure that was comfortable for the subject.

The TUG test was used to evaluate pre- and post-treatment times required. An armless chair was used, with a red cone placed 3 meters directly in front of the leading edge of the front leg as a marker. Responding to a verbal signal, the subject was required to stand up from the chair, walk around the cone, and return to sit in the chair. The time required to complete this task was measured with a stopwatch. The task was performed immediately before and immediately after stimulation, (1) at regular walking speed; and (2) at maximum walking speed, once for each. The times were measured and the time for walking speed at (2) maximum effort was used as the measurement value. 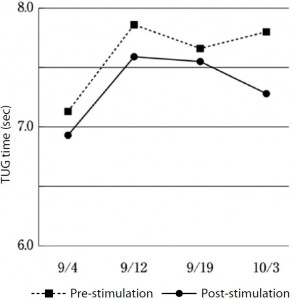 When walking at a moderate pace, after reaching extension at the end of the stance phase the lower limb swings forward like a pendulum, allowing the foot to move forward without employing the iliopsoas muscle. However, in effortful walking, the iliopsoas contracts powerfully during the initial-to-mid swing phase, flexing the extended leg to swing it forward 4. According to research conducted by Anderson et al using an electromyograph, the effect of these muscles on walking is greater the faster the pace 5. It is also likely that iliopsoas functionality also plays a role in pelvic stability while walking, as well as emergency postural control when balance is lost.

Eto reported on the probability that shiatsu stimulation improves regulation of muscle output 6, hypothesizing that this may be due to its effect on kinetic and sustained neuromuscular units along with increase in local blood supply. Similarly, the reduced post-treatment times recorded in this study were likely due to changes in the condition of the iliopsoas muscles due to shiatsu stimulation of the inguinal region, affecting their function during effortful walking to result in increased walking speed.

Regarding the fact that no cumulative time reduction was observed during the overall test period, this was likely because shiatsu stimulation to the iliopsoas in isolation did not result in a fixed change to the condition of the muscle. We hypothesize that, in order to achieve a more lasting change, it would be necessary to effect changes in hip flexors other than the iliopsoas, including the rectus femoris and tensor fasciae latae, along with antagonists such as the gluteus maximus and hamstrings, leading to changes of alignment in the sagittal plane for the hip joint and pelvis.

In this case, because no control was used, we cannot rule out the possibility that the reduced times were due to a learning effect in the test subject. Further research employing test methodology that includes a control is required in order to verify the effect of shiatsu stimulation in isolation.

Shiatsu stimulation to the inguinal region resulted in a tendency for TUG times to be shorter post-stimulation than pre-stimulation.

Abstract : With a view to relieving pain around the left shoulder joint and improving range of the left shoulder motion, a sixty year old female patient with frozen shoulder was treated by shiatsu. The treatment of twelve sessions resulted in removing the pain and improving the range of the joint motion. As for the range of motion, the difference between the left and right shoulders was eliminated. Increasing muscle flexibility by shiatsu therapy may have potential to ease pain and to improve range of joint motion. 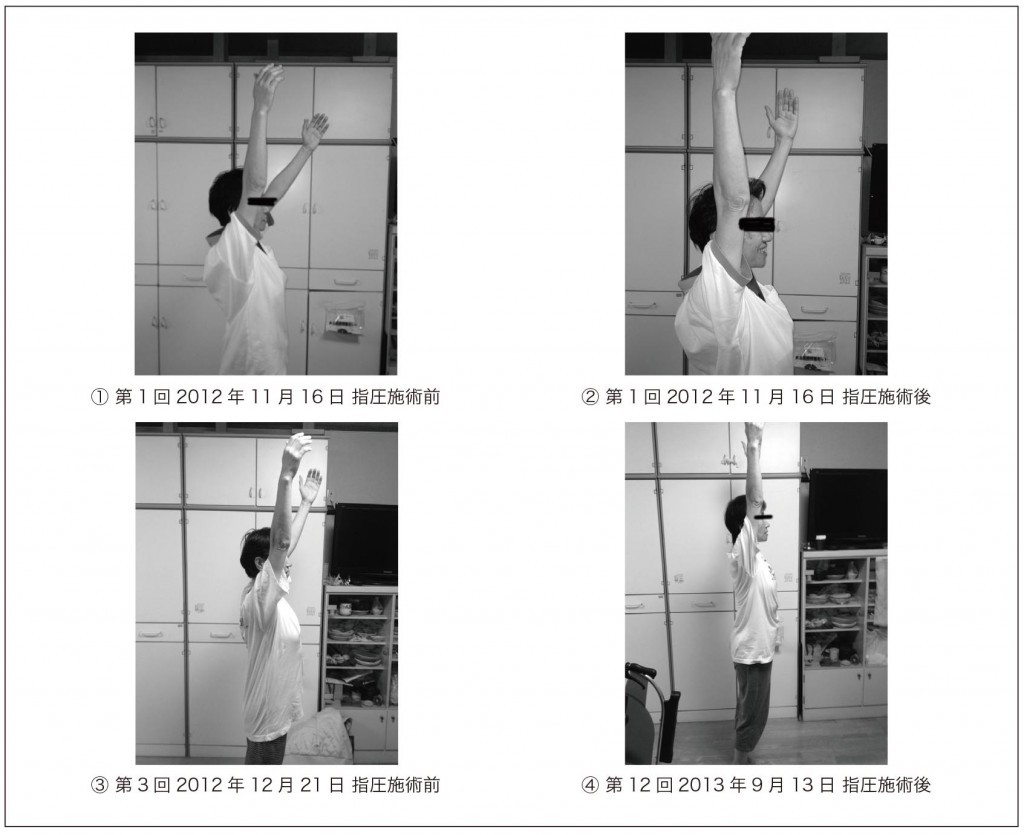 Effects of Inguinal Region Shiatsu Treatment on the Ability to Walk 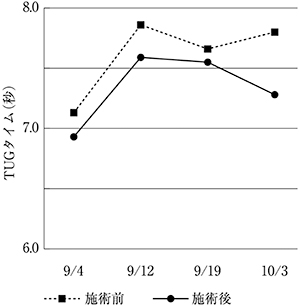 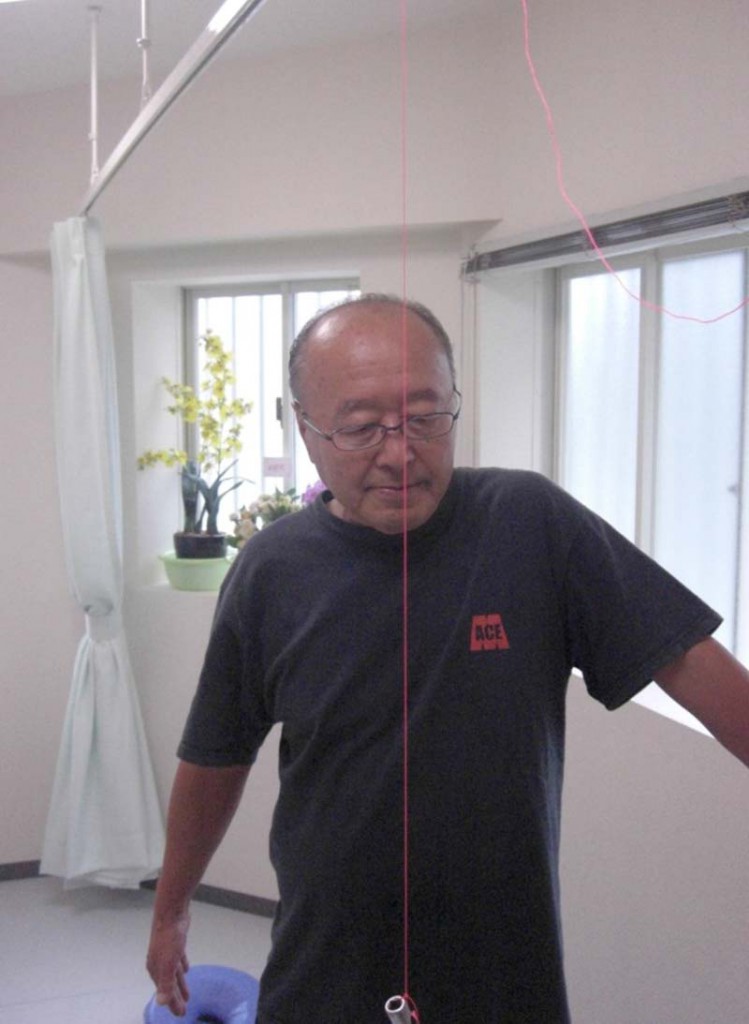 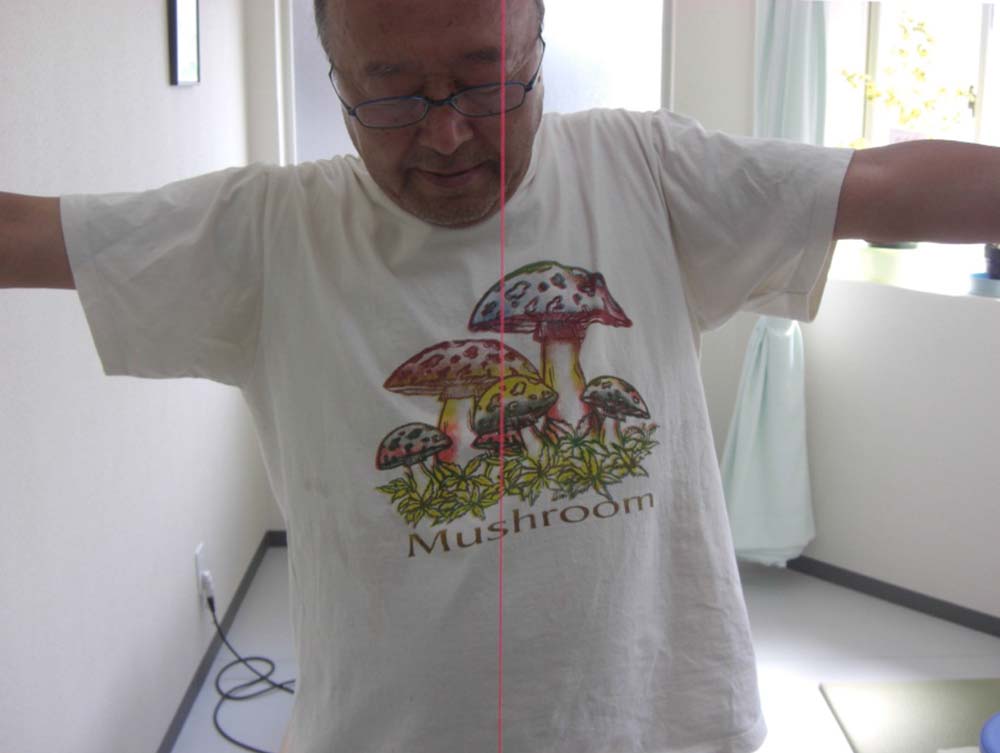